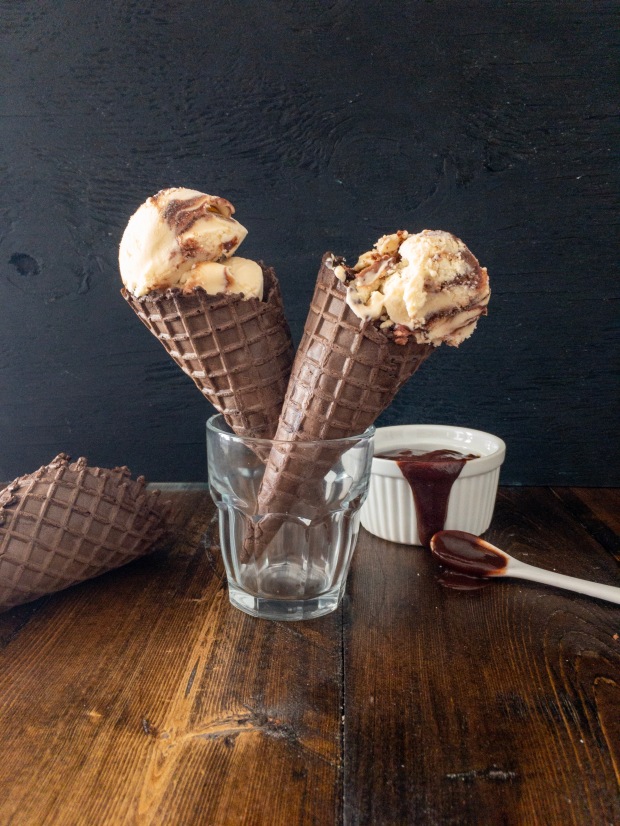 You know.  That season when s’mores-everything starts hitting the shelves.

Which is actually something I had dreamt up a long time ago.

A toasted marshmallow base, with a rich fudge ripple, and a swirl of graham crackers.

I even attempted to live out my food dream a couple summers ago, but poured the hot fudge straight into the ice cream maker with my marshmallow ice cream (I mean who does that?), leading to a chocolate ice cream (it completely overpowered the marshmallow) with chunks of graham cracker in it.  And while it was a delicious concoction, it definitely wasn’t what I had imagined, and wasn’t something I was going to share with the world.

That idea. That dream. Became just another recipe idea I stored in the back of my mind. Until I made the Easter – inspired cheeseboard last month. That board resulted in leftover bunny grahams sitting in my pantry, and if you’re familiar with the coastal region of North Carolina’s spring and summer, the humidity got to them before I could finish the box.

At least not in my household.

But we will if they’re in ice cream.

So, years after my first attempt, I skipped down memory lane and attempted to master s’mores ice cream yet again.

And I’m proud to say I’d share this with the entire world. It’s SO good.

The marshmallows are toasted and then blended into a custard base. The homemade fudge sauce is thick and creamy, and those bunny grahams add another element of chocolate and vanilla that is so needed. So necessary.

In a medium mixing bowl, add the egg yolks, sugar, and salt. Whisk together until the yolks turn a pale yellow in color. Set aside.

Place the milk into a medium sized saucepan. Set the burner to medium heat and heat the mixture until it is steaming, but not quite simmering.

Scoop out 1/4 c. of the heated milk and slowly pour it into the egg yolk mixture, whisking constantly, to temper the eggs. Repeat with an additional 1/4 c. of heated milk and whisk until mixture is well combined.

Pour the tempered egg mixture into the saucepan with the rest of the milk and heat, stirring constantly until the mixture has thickened to the consistency of heavy cream, and coats the back of a wooden spoon.

Remove the mixture from the heat and allow it to cool for a few minutes. Pour the mixture over the marshmallows in the blender and blend for about a minute.

Add the cold heavy cream and vanilla extract to the blender and process for an additional minute.

Remove the lid from the blender and allow to cool down to room temperature on the counter. Replace the lid and place in the refrigerator over night.

The next day, your mixture with be super thick and custard-like. Pour the mixture into your ice cream maker and process according to the manufacturer’s instructions.

for the hot fudge sauce

In a medium bowl, whisk the sugar, flour, and cocoa powder together. Set aside.

In a medium saucepan, combine the milk, butter, and vanilla extract. Cook over medium heat until the butter has melted.

Add the sugar mixture to the milk mixture, whisking constantly.

Bring mixture to a boil, stirring constantly until thick and smooth (about 5 minutes).

Remove pan from heat, transfer to a heat proof bowl, and allow to cool completely.

Store up to a week in your refrigerator.

In the bottom of an ice cream container (or whatever freezer safe container you’re using), spread some hot fudge sauce. Then sprinkle about 1/4 c. of bunny grahams. Top with half of your marshmallow ice cream. Repeat the fudge sauce, bunny grahams and ice cream before topping with one last layer of fudge sauce and sprinkling of teddy grahams.

Freeze for about 2 hours before serving in some awesome chocolate flavored sugar cones!

Or just a regular cone.