One of my most favorite series of books has got to be the Little House on the Prairie series. 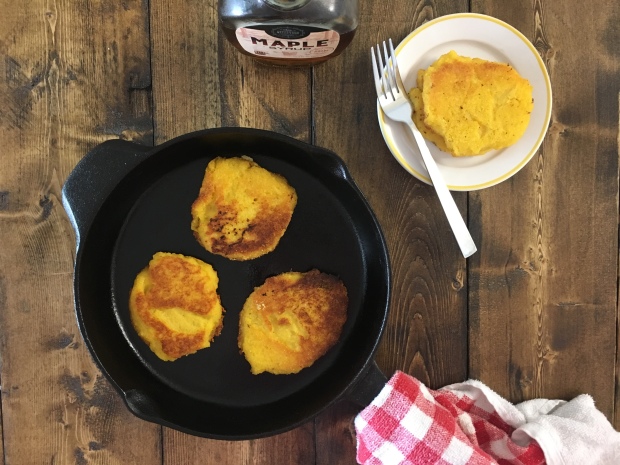 I started reading the books to my three-year-old in hopes that she would share the same passion as me. And I’m pretty sure I’m winning her over. Especially when I make the foods that are spoken about in the books. Like johnnycakes.

A johnnycake is a lot like a pancake, except that it’s made with cornmeal. However, the origin of the name is somewhat of a mystery, and most likely doesn’t involve someone by the name of Johnny. One thought is that they were originally called Shawnee cakes, named after the Shawnee Indian tribe, but colonist slurred the words, pronouncing it is “johnnycakes” instead. Others believed the origin of the name derived from “janiken”, the American Indian word that means “corn cake”.

Early settlers even called them journeycakes because they could be carried on long trips, which is probably why they were so favored by the Ingalls family. But regardless of how these cakes got their name, they are absolutely delicious.

Typically made with just cornmeal, boiling water, and a little salt, these cakes can be served any time of day. They can be served hot with butter, maple syrup, apple butter, or molasses like the pioneers did, for breakfast. Or they can be served as an accompaniment to a savory dish.

My version of johnnycakes has a hint of sweetness to them and the addition of milk lends hand to the fluffiest corn cakes without any sort of leavening.

I generally make my johnnycakes on the weekend for brunch. With fried apples, bacon or sausage, and scrambled eggs. But the leftovers are perfect for weekend breakfasts taken to the office with a hard boiled egg or two.

Add the water and butter to a small saucepan. Heat over medium-high heat until the butter has melted and the water is boiling.

Remove cooked johnnycakes and place them on an ovenproof plate. Keep the cakes warm in a 200 degree F oven.

Melt an additional tablespoon of butter in the skillet and cook the remaining cakes.