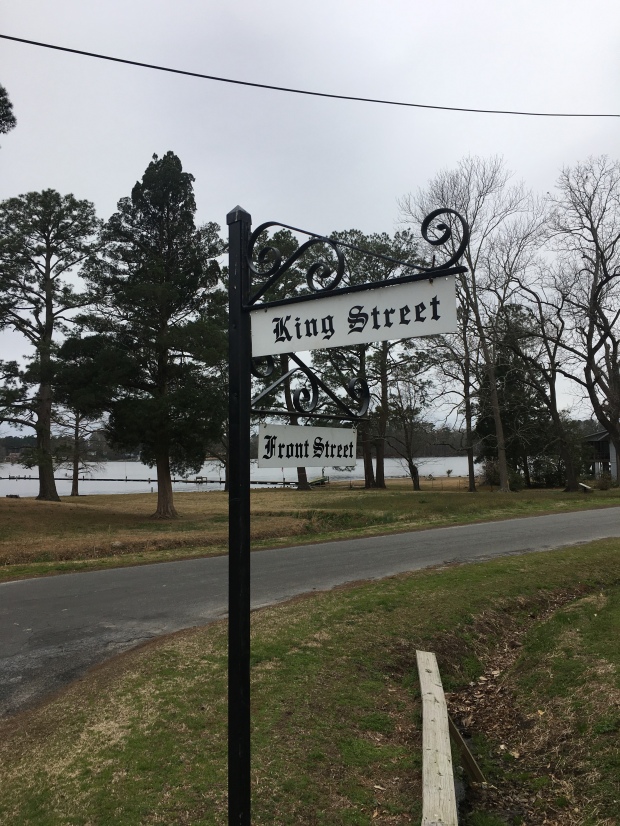 Meaning we underestimate and overestimate the two categories quite often. No, you can not drive across the United States and be able to visit popular destinations along the way on a week’s holiday. And no, 300 years is not a long time, and a building built during that era probably wouldn’t even be worthy of a photograph from a European.

But that’s okay, because it’s old to me.

So the other weekend I took Audrey to the oldest town in North Carolina. Having been established in 1705, Bath recently celebrated their tri-centennial.

So what makes this quaint riverfront town so interesting? Besides being the oldest incorporated municipality in NC that is. And being the state’s first port of entry. It was the home to Edward Teach, most famously known as Blackbeard!

So jump in your car and spend a portion of your day exploring this historical little town.

If you’re traveling from the south, or the crystal coast region like I did, you’ll want to catch the ferry from Aurora to Bayview (so plan accordingly). Bath is only a few miles up the road from Bayview. Once you get there, you want to head straight to the visitors center. In there, they’ll provide you with a town map, indicating the historical sites and a pamphlet explaining each one. You can also request to view a 15-minute video tracing Bath’s history back to the days of Blackbeard. Do it. Then grab your map and head out on your self-paced journey.

If you have littles during this self-paced town tour, you’ll probably want to bring their stroller. While the town is small, there is a lot of walking. Most of the tour takes place outside, on roads not equipped with sidewalks, but a few opportunities do bring you indoors! Like the Van Der Veer House – converted into a small museum that takes you on a journey through history. And both the Bonner and Palmer-Marsh houses which require a small entrance fee ($1 per person per house). Both of these are guided tours.

When you’ve finished the town walk, head back to the old high school and check out the bicycle and historic map exhibits along with the little gift shop.

By this time, you’re probably ready for food. I know I would be after all that walking. Or sitting. Or really anytime. So stop by the Quarterdeck Marina where you’ll find locals and tourists frequenting by foot and by boat.

And when you’ve finished dining, head to your next destination. Whether that’s back home – or to Ocracoke! The place where Blackbeard’s life ended!