The first time I ever heard about a macaron, I was watching the movie Marie Antoinette.

The entire movie was filled with delicious candies, desserts, and sweets.  All provided by Laduree (who currently has a Limited Edition Marie Antoinette individual yule log available that looks divine).

I dreamed about the day that I could host a party with all these French-inspired treats, but I settled on simply just trying one.

So, let’s fast forward to my homecoming and my yearly trip to New York City – because back in those days I made sure to go at least once a year.  And,  because of my luck, I just so happened to choose the coldest weekend of the year to do it.

The coldest part of our day was probably as we stepped outside of the subway on Wall Street.  I had a goal of purchasing a necklace from Tiffany & Co. but as we left the store, the frigid wind was unbearable and we ran into the next store we saw: La Masion du Chocolat.

One sniff and I knew I was in heaven.

And it was here that I had purchased and tried my first macaron. 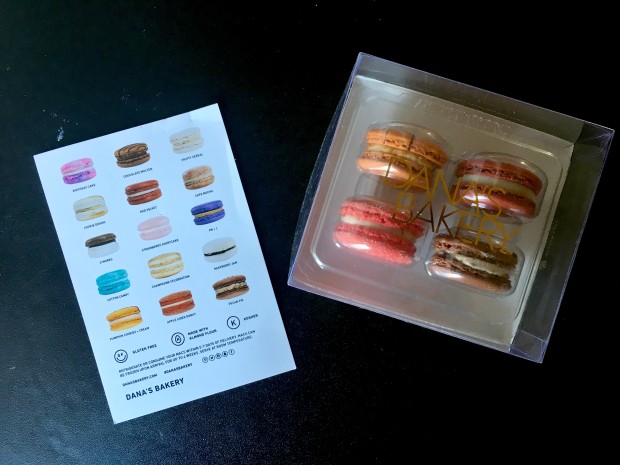 As the years have passed, I have ventured to other locations (although, I’ll admit that I have yet to try some from Laduree) to try their macarons or I simply just make my own.  The cookie has become a family favorite, so it’s easy enough to persuade them to head to a store whenever we are in the city.

So, this past weekend we celebrated my daughters 2nd birthday a little early by taking her to the American Girl store and picking out a Bitty Baby. While we were there, we made sure to stop off at a shop that sells macarons to pick some up before heading home.

And I thought of you!

So, on the fourth day of Christmas gifts, I’m giving to ONE lucky winner: a four-pack of macarons (apple cider donut, red velvet, pumpkin cookies + cream, and pecan pie)

Along with a cowl, gingerbread bath products, and a wire bow ring.

So, what are you waiting for?   Head over to the giveaway and enter!