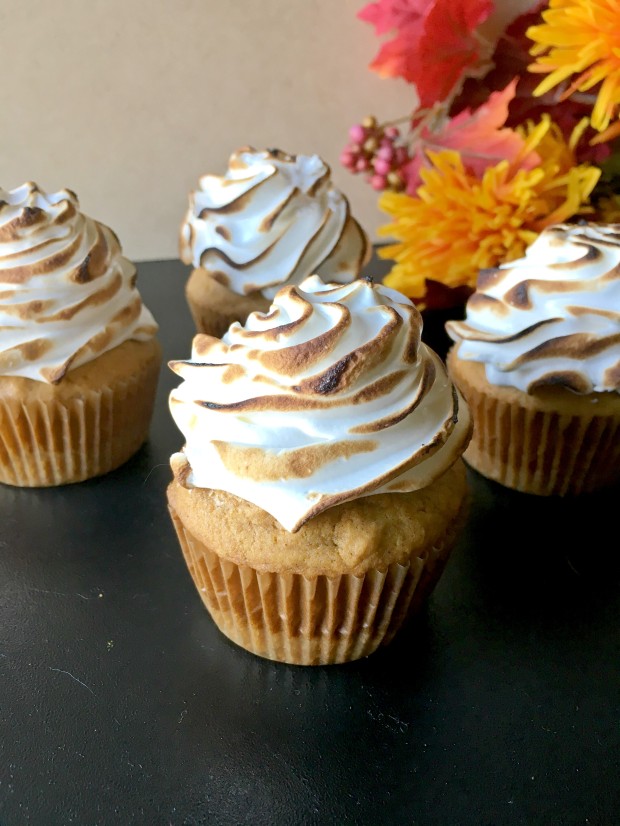 Pumpkin + s’mores = a match made in heaven.

Last year was my first introduction to this flavor combination and I just can’t seem to get enough ever since.

This obsession all started while I was searching a blog written by one of my favorite food bloggers [Lauren over at Healthy Food for Living]. I stumbled across her recipe for pumpkin s’mores pudding in a jar and thought what a unique idea – so I gave it a shot.  And then proceeded to make it every night that week.

While I’m thankful I didn’t decide to do that again (I swear I have no control), I did make these pumpkin s’more cupcakes… and ate one every single day until they were gone.

I guess not much has changed over the course of a year, has it?

I started with a graham cracker base – one that I use when I’m making my standard s’more cupcakes. But instead of topping it with a chocolate cake, I chose to use pumpkin.

The thing is, a few years ago I gave bagel-making a try and decided for my first batch, I was going to do pumpkin (give me all the dang pumpkin!).  What was different about this recipe was that it called for orange juice.  And as much as I was hesitant about adding it to the bagels, it made the pumpkin flavor just *pop*.  So, I definitely knew that my pumpkin cake must include orange juice.  Because I really needed that pumpkin flavor to be prominent so that it wasn’t masked by what it was going to be filled with.

CHOCOLATE GANACHE.  Because what’s a s’more without chocolate.

However, don’t be like me and assume that because a title has “cream” in it, that there’s actually cream in there.  I stupidly forgot to pick up heavy cream when grocery shopping and thought “oh, it’s just two tablespoons, I’m just going to use my creamer instead” to find out that the creamer is actually low-fat milk.  Needless to say, this ganache was not the smooth and creamy chocolate filling that you would typically get when making the recipe correctly.  But hard.  And candy-like.  As if I’ve just baked a chunk of chocolate in the center.

But that’s okay.  Because the toasted marshmallow frosting totally made up for it. Because it’s marshmallows.  And toasted.

Talk about getting a freaking hand cramp!

I really should invest in one of those kitchen torches.

Especially so I can make crème brûleé.

Preheat oven to 325 degrees F and prepare your cupcake pan with liners.

In a small bowl, combine the ingredients for the crust and mix well (it should resemble course sand).  Press about 1 1/2 tbsp. of the mixture into the bottom of the cupcake liner.  Bake for 7 minutes and then remove from the oven and set aside.  Increase heat to 350 degrees F.

In a mixing bowl, whisk together the flour, baking powder, baking soda, salt, and pumpkin spice seasonings.  Set aside.

In the bowl of an electric mixer fitted with the paddle attachment, mix together the butter, half of the oil, and both sugars.  Combine until light and fluffy.  Mix in remaining oil and eggs, one at a time.  Mix in the vanilla.

Divide the batter amongst the lined muffin cups, filling about 3/4 of the way full.  Baking in the preheated oven for 18-22 minutes or until a toothpick inserted into the center comes out clean*.  Cool the cupcakes in the muffin tin for about 5 minutes and then remove and allow them to cool the rest of the way on a wire rack.

While the cupcakes are cooling, making the ganache filling.  In a microwave safe bowl (or over a double boiler), heat the chocolate until just melted.  Slowly add in the heavy cream, whisking while pouring.  Make sure you go slowly, as you don’t want the chocolate to seize.

To make the meringue frosting, combine the egg whites, sugar, and cream of tartar into the bowl of the (cleaned) stand mixer.  Place over a saucepan with simmering water, whisking constantly until the sugar is dissolved and the egg whites are warm (this should take about 4-6 minutes).

Once sugar is dissolved, remove from heat and place bowl onto stand mixer fitted with the whisk attachment.  Start on a low speed, gradually increasing to high until stiff, glossy peaks form (this can take about 5-7 minutes).

Fill a pastry bag with frosting and pipe until completely cooled cupcakes.

Take a lighter, and tediously toast the entirety of the marshmallow topping.  Or use a kitchen torch.

*Tip: You really shouldn’t bake your cupcakes until a toothpick comes out clean, but should bake them until there is no more “runny” batter.  The toothpick, when removed, should have crumbs on it – this way you know you haven’t overbaked because the cupcake will continue to baking a few minutes after you’ve removed it from the oven.