I know what you’re thinking.

Is this girl legit right now?

A couple weeks ago,  I took my daughter to go blueberry picking at a local you-pick farm.  She had a blast and we ended up leaving with over five pounds of blueberries and a jar of blueberry honey. 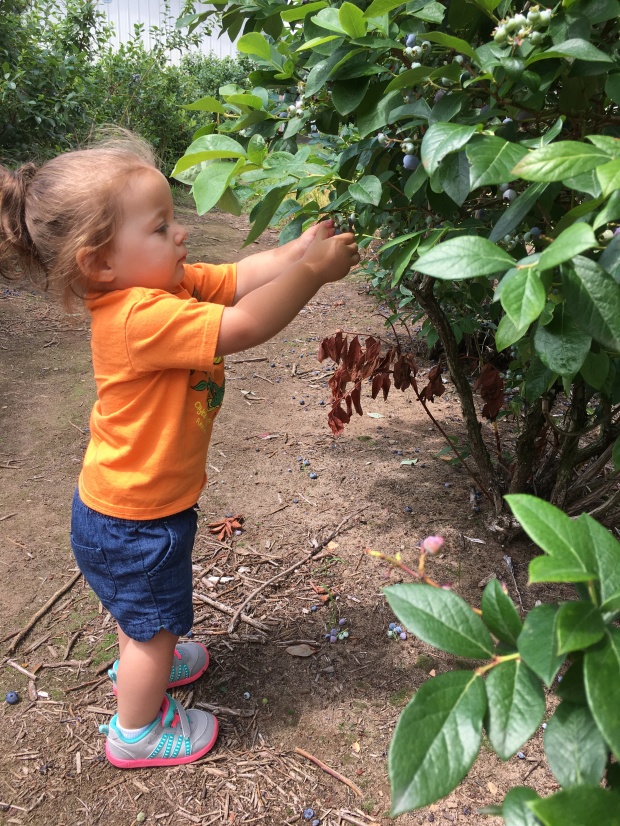 And even though I’m a huge fan of fresh blueberries, there was absolutely no way I was going to be able to consume all of them before they started to go bad.  I also knew I wanted to make something a little unconventional instead of what you would typically do with five pounds of blueberries [make jam].

And when would I ever want to be typical?

Generally when I’m trying to get inspired, I turn to Pinterest (because, let’s be honest – I’m not creative enough to think of this stuff on my own).  And that’s where I found this.  A recipe for blueberry freaking caramel sauce.  I just had to make it.  Had to.

I imagined putting this on everything: ice cream, apples, eaten off of a spoon, etc.  buttttt as soon as the caramel sauce hit my vanilla bean ice cream it firmed up and became quite tacky.  And while it was still absolutely flipping scrumptious, I thought of another way to use the caramel sauce.  So, stay tuned for Wednesday’s post to see what way that was!

Place the blueberries in a food processor and process until they are smooth.

In a saucepan, add the sugar and water and stir until combined.  Heat over medium-high heat and cook until the sugar has melted and begins to turn a rich amber color (about 8-10 minutes).

Remove the saucepan from the heat and carefully pour in the blueberry puree.

Place the saucepan back onto the heat and simmer for about 5 minutes.

Strain the mixture with a fine mesh strainer and place back onto heat, simmering until the caramel sauce thickens (about an additional 10 minutes).

Remove from heat for the last time and stir in lemon juice.  And then try to contain yourself from eating the entire cup so you can use this the same way I did!

Apparently someone wanted those blueberries.

One thought on “blueberry caramel sauce.”