My goodness – a little tangent before I talk about this great crisp recipe.  So – unfortunately the crochet items my mom has been making for my daughter has come to a halt for the time being as my mother is preoccupied with other things.  However, I’ve been doing a monthly photo session with Audrey corresponding to each month (January she was a snow-girl. February she was covered in kisses, March she was an Easter bunny, and April she was sitting under an umbrella).  I did NOT want this little adventure of ours to end, so I’ve watched countless YouTube videos over the past couple of days to learn how to crochet.  I’ve somewhat gotten the hang of it, but the bottom to my bonnet for May is super uneven.  I really only have 10 more days to finish it so I’m just going to knock it out and pray it still looks okay.  Then I’ll take my time with June’s.  So far this is what I have… 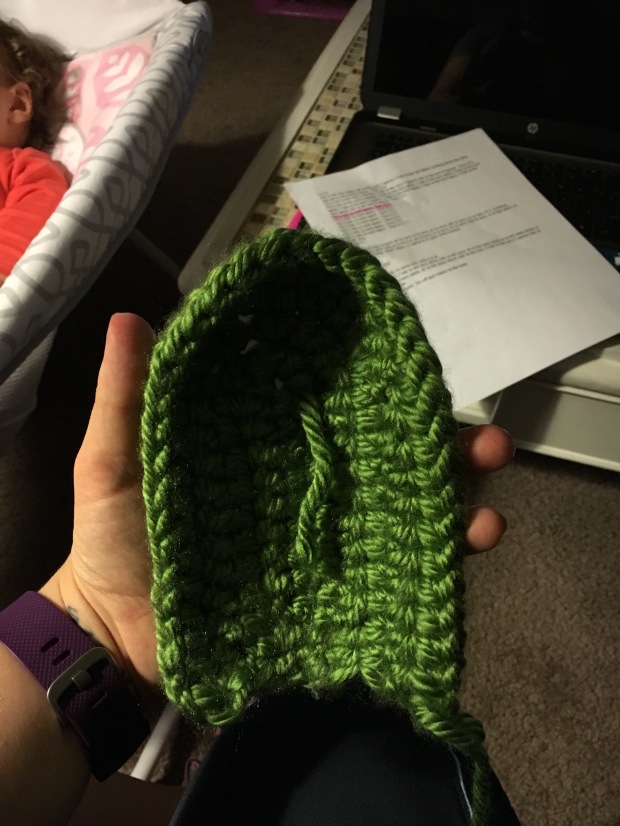 Do you see that uneven bottom?!  I swear, I unraveled it a good 10 times and redid it, but after so many attempts I’ve just given up on trying to make it even and hopefully as I go on further it’ll start to look better..

I’ve always loved a good crisp.  I mean, who doesn’t get giddy at the thought of warmed fruit with a crispy oatmeal topping finished off with a scoop of vanilla ice cream?  I have been in the mood for a mixed berry crisp for as long as I can remember, but I can’t fathom spending the amount of money it would take to actually satisfy my want.  This is why frozen fruit makes a great replacement – because honestly, it doesn’t matter the season.  You’re able to enjoy a berry crisp whenever you want.

Not only can you enjoy this during any season but you can enjoy it any time of the day.  I’ve primarily ate it for dessert, but there may have been 2 days where I snuck it in for breakfast.  And why the heck not?  There’s less sugar in this than there is in a bowl of Frosted Flakes.  The original recipe called for only 24oz of frozen mixed berries, but I doubled the fruit because I used a deep dish pie dish andddd the bag I bought was 48oz.  I did, however, keep the topping amount the same, but subbed honey in for the maple syrup. 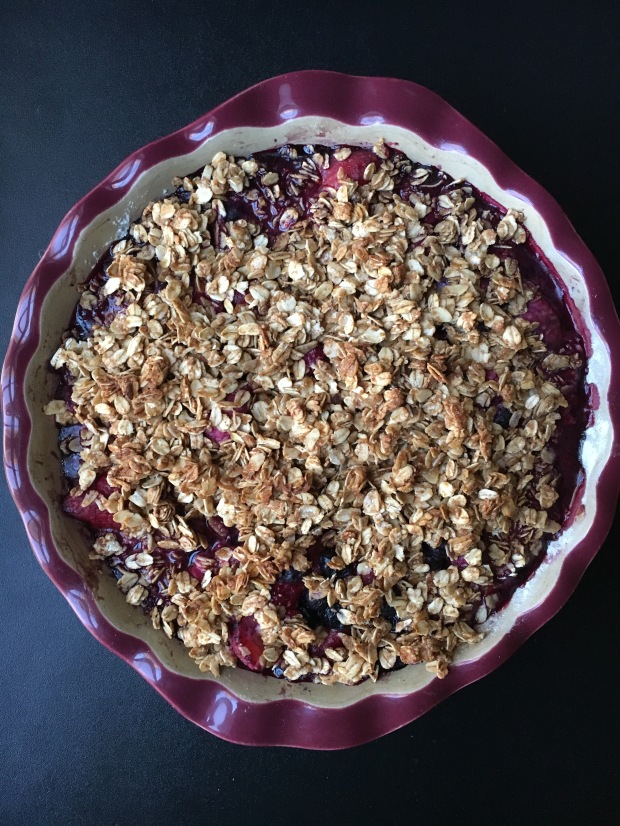 Preheat the oven to 350 degrees F.

Pour the thawed berries (undrained) into a deep dish pie dish.  Sprinkle the 1/4 cup of flour and 2 tbsp sugar on top of berries, mix together and then set aside.
In a small mixing bowl, combine the oats, 2 tbsp flour, brown sugar, cinnamon, salt, oil, honey, and vanilla.  Mix until combined.  Sprinkle on top of berry mixture.

Bake for 20-25 minutes or until bubbly and crisp turns a golden brown.

Serve with vanilla ice cream for dessert or do what I did and make a banana “nice cream” to scoop on top.  You could also pair this with some Greek yogurt for breakfast or just eat it plain.  Which ever way, enjoy it!

One thought on “Anytime Berry Crisp”